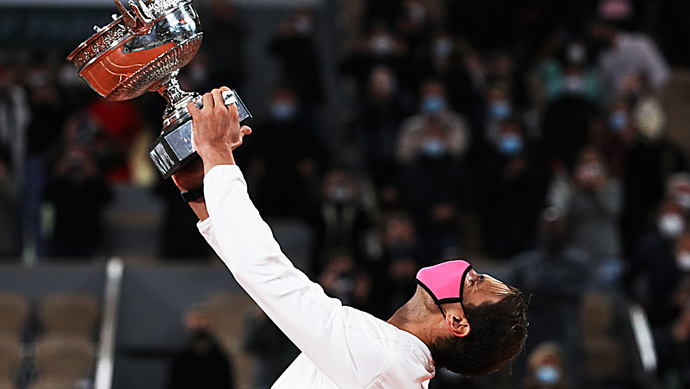 On the evening of October 11th, Beijing time, the French Open men's singles final was over. The No. 2 seed Nadal swept Djokovic in straight sets and won the 13th French Open with a record that was not lost. And the 20th Grand Slam crown. After Nadal got the 20th crown and tied Federer, Federer immediately blessed Nadal: "I am honored to congratulate him on winning the 20th Grand Slam championship."

Nadal got his 13th Musketeer Cup as he wished, and his record at the French Open also came to 100th and 2 losses. Since participating in this event in 2005, only Soderling and Djokovic have defeated him in Roland Garros. Nadal's dominance in the French Open is the best in history.

This final is the 56th clash between Djokovic and Nadal, and the number of clashes between the two of them is also the most of all players in the Open era. It can be said that the two of them represent the highest level of tennis in this era. In the first 55 matches, Djokovic had a slight advantage with 29 wins and 26 losses, but the 8 major matches between the two were evenly divided. In Roland Garros Nadal with 6 wins and 1 loss, he was overwhelming. Advantage. 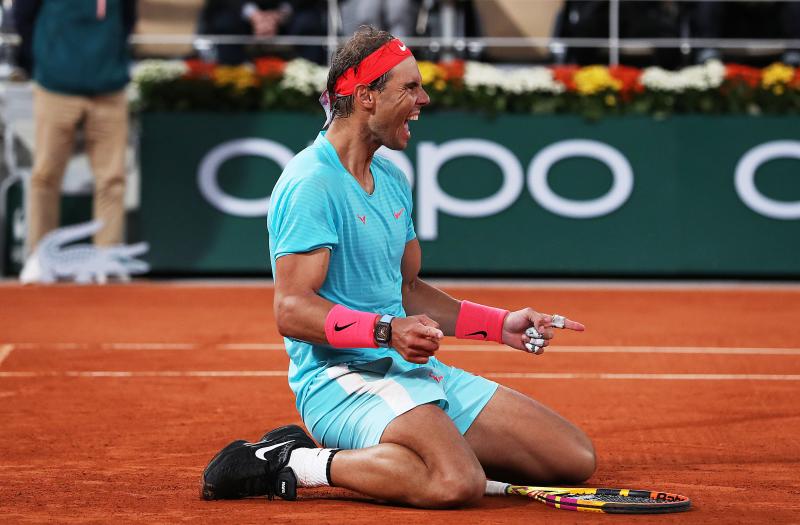 Who can imagine that after an hour and a half of the game, the current world No. 1 Djokovic won only two games and lost 0-6 in the first set. It is true that Djokovic has the problem of a slow start like a few rounds, but it is obviously inappropriate to describe him as "abnormal". His performance on the court is still good, whether it is the direct damage of the forehand or The precise touch in front of the net is worthy of this final, and worthy of the resounding name. But this day’s Nadal was horribly excellent. His number of unforced errors in the first two games was only six. Such an existence would impose a huge sense of oppression on his opponents. Djokovic was clearly caught in this. Unable to get rid of the oppression, he made up to 30 unforced mistakes.

"I played very well in the first two sets. It was too good to be better, otherwise there would be no such score." Nadal said, "Winning here means everything to me. It is not about being equal with Roger (Federer). For me, this is just another victory for me at Roland Garros. It means everything to me. The most important moments of my career are here. I love this city and this stadium. ."

The French Open has 13 crowns, 20 Grand Slams, and Roland Garros 100 wins. I am afraid there is nothing more perfect than the combination of these numbers. No matter what exaggerated words are used to praise Nadal's achievements, he is worthy. But his own chest and humility showed us even more admiration. At the awards ceremony, Rafa passed on the warm power to the world-"This year is indeed very difficult, the whole world is experiencing catastrophe. Therefore, this time I am not as happy as before. I hope we will come back in a few months. The audience is full, enjoy Roland Garros together." Nadal lowered his head after speaking with tears in his eyes. 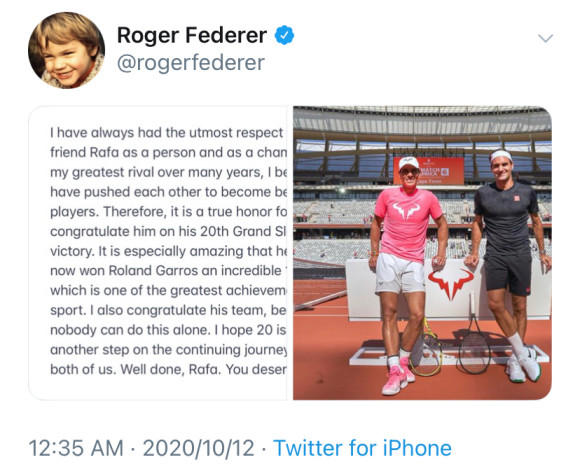 Federer sent a congratulatory message to his old opponent as soon as possible after the game.

Federer wrote: "Whether as a person or as a champion, I respect my friend Rafa very much. As my biggest opponent for many years, I believe that we push each other to make each other better players. Therefore, I It is an honor to congratulate him on winning his 20th Grand Slam championship. What is especially surprising is that he has now won the French Open an incredible 13 times. This is one of the greatest achievements in sports...".

"I always pay the highest tribute to my friend Rafa, whether as an ordinary person or a champion. Over the years, as each other's strongest opponents, we have promoted each other and become better players. Therefore, I Congratulations to him for winning his 20th Grand Slam championship. Hope the 20th is just the beginning of our new journey. Good job, Rafa! You deserve it!"